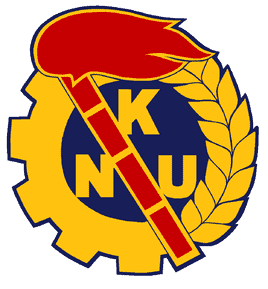 Friday, July 22nd 2011, Norway experienced the most tragic event we have experienced since World War 2. Right before 15:30 a bomb exploded in the Government quarters in the center of Oslo. This event alone, which killed 7 people and damaged buildings throughout the center of our capital, was a tragedy in itself. It was, however, completely overshadowed by the following massacre at the Labour Youth camp at Utøya. The death toll is still not totally clear, but at least 86 people, mainly teenagers and young people, were brutally gunned down and killed, while almost 70 are lying injured in hospitals, some close to death. These coldblooded murders are made far more tragic by the fact that they were aimed at innocent youths and children gathered at their annual summer camp, to discuss political issues and enjoy their summer holiday and each others’ company.

The Young Communist League of Norway (NKU) expresses our deepest sympathies to the Labour Youth (AUF), to the injured and to all who have lost their friends and loved ones. Due to the history we share with AUF, being members in the same organization from 1903 to 1923 and by many decades of common struggle, the attacks feel extra personal.

When the first reports came in about the explosion in Oslo, many people were quick in making their conclusions about who was responsible and expressed their hatred against immigrants and Muslims. That many people assumed that Muslim extremists were behind the attack isn’t surprising, considering Norway’s eager participation in NATO’s imperialist wars. But that so many, so early, used this horrible event to fuel the hatred against immigrants in Norway was both frightening and reprehensible.

Had the attack been carried out by a Muslim, the political consequences would be enormous. The already widespread prejudice against Muslims would be ignited and the attack would be used by right-wing extremists and populists to ”confirm” their views on the dangers of immigrations and Islam, legitimize more discrimination against minorities and a more aggressive foreign policy. The authorities would most likely also use the occasion as an excuse to expand the police’s powers at the expense of individual freedoms, as has happened in the USA and Great Britain.

It is now known, however, that the mass murderer responsible for the attack is neither immigrant or Muslim, but quite opposite an ethnic Norwegian and conservative Christian. Ironically, the individual responsible for both the attacks on July 22nd, Anders Behring Breivik, shares many of the same views as the many people who immediately after the attacks blamed immigrants. Breivik is a right-wing extremist, but his views are common: conservative, anti-muslim, anti-immigration, and anti-socialist. These views are found throughout Europe and are growing at an alarming rate. For far too long these views, promoting irrational hatred against immigrants and political opponents, have been left alone to grow unopposed by governments and the media. NKU has in the last few years stressed the danger of this growing ideology of hatred and has had the struggle against it as a high priority. Now we have, unfortunately, experienced exactly how dangerous it really can be.

The tragic event in our country shows the importance of a common struggle throughout Europe against this growing disease, which is nothing else than fascism in a new disguise. Even though the attacks were carried out by a psychotic individual, the political motives behind them cannot be ignored. And even though catastrophic attacks like these are very rare, the hatred that drove them will be a constant threat to our societies if it is left unopposed. The only solution is opposing prejudice, xenophobia and the demonizing of political opponents that this growing neo-fascist ideology represents, and creating a society based on peace, tolerance and equality, both domestically and internationally.

Central Committee of the Young Communist League of Norway (NKU)
24.07.11